Sri Lanka as a Vantage Point for International Film Making 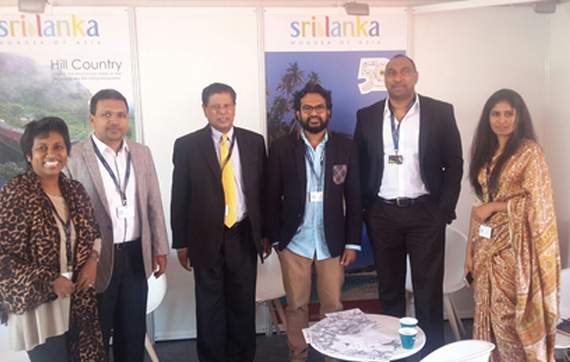 The 69th edition of the Cannes Film Festival, one of the key events in the international entertainment calendar, from 11th to 22nd May 2016, in the city of Cannes, South of France saw the Sri Lanka flag fly high at the International Film Market for the first time.
The Marché du Film is the most important event of the film industry. This year there were over 10,000 professionals participating including 3200 producers, participating at this event. The International film village is a networking hotspot which highlights the industry, the production and cinematography. Sri Lanka’s breathtaking landscapes and scenery that have already become a salient feature with the French film makers were aptly brought to life at the country’s pavillion in the Cannes International Film Village promoting the country as an idyllic location for international film producers.

This initiative to represent Sri Lanka at the International Film Market, organized with the patronage of Dr Harsha De Silva, Deputy Minister of Foreign Affairs, was a public private partnership involving the Sri Lanka Tourism Promotion Bureau, the Embassy of Sri Lanka in Paris, the Sri Lanka Film Cooperation, and six companies in the industry.

The Sri Lanka Pavilion designed as a platform for stakeholders to market the country saw a lot of interesting activity, with packed attendance for the interactive sessions. Ambassador Tilak Ranaviraja and the Trade Counsellor Mr. Alexi Gunasekera accompanied the Hon. Deputy Minister to the Sri Lanka Pavilion. Mrs. Sandya Salgado and Mr.Vimukthi Jayasundara, renowned industry personnel and other stakeholders, were also present on this occasion. During the 10 days, the Cannes Film Festival offered unique opportunity to engage proactively with representatives of other countries, institutions, professional organization and producers. The pavilions, while showcasing the rich diversity of countries, made space for official engagements, media events and signing of agreements and treaties.

A notable feature of this year’s activities at the Cannes Film Market was the exclusive networking receptions organized at the Sri Lanka pavilion attracting many producers, directors and other related professionals from many countries such as USA, Israel Japan Hong-Kong Italy, France and the UK. This new initiative aimed at promoting and forging ties for co-production and partnerships between Sri Lanka and these countries. Business meetings also took place between the Sri Lanka delegates and international stakeholders to facilitate business promotion and explore opportunities for partnership.

The foundation was laid to sign a co-production agreement with the CNC (French National Film Co-operation) during a meeting held with the French Film authority. At the meeting Dr Harsha de Silva De Silva remarked that after the signing of this agreement the filmmakers of France and Sri Lanka will have the opportunity to produce films under bilateral co-production agreements. Bringing different nationalities together, this agreement would also “forge new markets and wider audiences,” the Deputy Minister added. The agreement that is intended to be signed at the 70th edition of Cannes will further support archiving of Sri Lanka films and digitalization of the Sri Lanka cinema.

A second Agreement that has been discussed and that will be signed with the organizers of the Cannes film festival and the National Film Cooperation of Sri Lanka will allow networking opportunities with international producers and conducting of training sessions for Sri Lanka film makers to develop cinematographic skills that would enhance the skills of Sri Lankan film makers. French Film Producer Philippe Avril, General Manager of Les Filmes de l’étranger, also signed an MOU with Film Island/Sri Lanka to further synergise the concept of the country as a film production location.

Conscious of the fact that co-productions can contribute to an expansion of film industries as well as growth in the economic and cultural exchanges between the two countries, further opportunities will be explored to sign co-production agreements with other countries in the future.

Ambassador Tilak Ranaviraja speaking at the inauguration of the networking session pointed out that the medium of film provided a great platform to showcase the culture and diversity of a country. Many iconic films, French television series and documentaries have already been filmed in Sri Lanka due to our stunning locations as well as the accessibility, authenticity and compact nature of the Island.